Sunday morning 9th September, Prue and I drove to Sydney airport and parked the car. Lindsey called to say she was still at Tullamarine. We were a little concerned but I’m sure we thought “Na! she’ll be right”. Sadly, it wasn’t!  Lindsey AKA “Nairny” missed the flight from Sydney to Dallas. No amount of pleading to the Qantas staff was going to change the course of events. All was not lost though, as sharing our farmhouse for the event was Charmaine Torzillo and Liane Wilcox. Their flight was on Monday, so Lindsey booked herself via a dirty white Qantas lounge phone, onto the Monday flights and into a cheapo motel nearby.

Monday morning, we teamed up with Rebel Morrow. Three team members in place, we pick up the F Truck, we were traveling Texas Style!

Arriving at Tryon it was obviously a hive of activity. Our accreditation done and our “mug shot” ID’s dangling around our necks we headed to find our way around. Firstly, discovering said dangly ID Media accreditation earn us a a lovely lunch! Winning!! We met up with the Aussie eventing team, ran into Boyd Martin, collected the box of equipment that had been shipped over for the broadcast, watched a few horses and decided to head for home.

First on the list of to do’s was visit Walmart in Forest City, not far from our farmhouse. A couple of testing turns onto the wrong/right/left side of the road and we made it into the carpark. The foyer to Walmart was an interesting sight, you can’t unsee some things, let’s just say that! Groceries and essentials done, did you know Walmart sells 1 ltr bottles of Aussie wine for $3 USD! Along with many other trashy items, hoho’s, many isles of boxes of synthetic food and Halloween costumes!  Lindsey and our housemates arrived later that evening.

Tuesday morning was a little like Christmas morning, opening the box of equipment that was wrapped in bubble wrap at sparrow fart. Everything seemed to be all in good order. The plan for the day was to head out to the venue again and prepare for our broadcast and watch the opening ceremony in the afternoon.

A great day, watching all the best of the best eventers riding and even watching the best of the best watch Ingrid Klimke training the amazing SAP Hale Bob OLD. We met up with the team from Sunset and Vine, who would be helping us set up our broadcast position, we were shown where would be situated for the next five days. At this stage we had one broadcast position, in the International arena where the two days of jumping would be. We would watch the dressage on screens.

The opening ceremony was outstanding, as expected. Andrew Hoy carried the flag for Australia, a very proud moment!

Wednesday’s plan was * Prue and Nairny do the cross country walk. * Fi and Rebs set up and test the equipment. Insert here loud BA BONG! The essential audio box had a malfunction! Ok let’s not panic, it’s only the power cable, Walmart has on their website a power inverter/converter. Off we go Rebs! After unsuccessfully obtaining what we needed from Walmart and five other similar big supermarket type outlets, “no ma’am, you need to go to Hendersonville for one of those!”. Off we go Rebs. Arriving at the supposed sound equipment outlet, Na! we struck out again! Ok plan B or was that D, E or F, actually I think it was P for PANIC!!! Charmaine had been part of the initial installation of the audio box equipment four years ago, “Charmaine, HELP!!” we need a new audio box. I had some intel from a local there was a sound equipment store nearby to Forest City but couldn’t seem to find a website to see the range available. Charmaine and Liane went in search of the unknown shop, “oh yes ma’am you know I seen one of those audio box things at the pawn shop last week!” OMG we’re saved!! Two new Sit Tight team members were added as technical staff! Accredited with dangly ID’s, too easy.

Wednesday afternoon trot up was looming and testing the sound equipment, the new/second hand/ pawn shop audio box seemed to go well. So, we thought!! As the storm clouds rolled in we got underway with calling the first horse inspection. At this time the heavens opened up and technical staff from Sunset and Vine ran in all directions as the rain was horizontal! The shelter of the awning was no match for the wind and rain. The equipment was covered with plastic garbage bags. Not ideal. Receiving feedback to say, all was not good in the sound department! A long afternoon and into the evening spent testing and re testing and the white pawn shop box was discovered to have a fault in the second microphone feed. Arh har!!  At the same time swift negotiations with main man Mark from S & V and due to the inconvenience of this afternoon’s partial hurricane, S & V says, “Ok, Sit Tight Radio now has two commentary positions” great news! 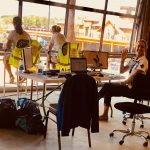 Going forward into the first day of dressage in our new position over-looking the Tryon arena, we seemed to have over-come the hiccups. Rebel and Lindsey secured some great rider interviews and Rebel actually got quite a buzz being down with the riders so Rebs found her “Sit Tight Team Role”. Prue and Lindsey decided our listeners should provide us with the “word of the day”. It did keep us entertained through 83 dressage tests! Thanks to Janet Houghton FLANGE was the winner of the word of the day, congrats Janet taking away the Tryon WEG gift bag.

During day two of dressage a tremendously handsome rider from Italy, Stefano Brecciaroli riding the very elegant Byrnesgrove First Diamond really took Lindsey’s eye! Stefano seemed to hold a good long eye contact with the judge at C Anne-Mette Binder from the first halt salute, the test travelled down the centre line quite a few times and the eye contact that Stefano held was fascinating. He did post a very good score, 28.4 penalties into 18th placing. Swipe right for Stefano!

The reports of Hurricane Florence started to circulate. Talk of shortening the cross country course, putting it off till Sunday and other crazy ideas abounded. As far as we were concerned – in the words of a favourite Aussie movie – “tell ‘em they’re dreamin!”

Friday afternoon, we caught up with Mark from S & V to confirm Saturday commentary position, and Sunday show jumping. Mark says “no event Sunday due to the hurricane” more of the – “tell him he’s dreamin” idea!

Saturday cross country day dawned, perfect cross country weather, light wind and showers. The first few horse and riders home and our Sit Tight team and the rest of the world thought “wow, this course is very friendly!”. It wasn’t long till we watched a hero of the sport Blyth Tate nearly being spat over the handle bars, how quickly the scene changed! Many exciting moments throughout cross country including Sir Mark Todd’s lovely youngster McClaren over jumping 14B, landed a little heavily, testing Sir Mark’s stickability and at one point both his reins looked to be on the same side of his horse’s neck. Watching Niklas Lindback jumping the Squirrel combination 18B and C, a rugged landing on his saddle, even the squirrels complained of mistreatment of his nuts.

Heading home to our farmhouse Saturday afternoon with a feeling of mixed emotions we prepared for the oncoming hurricane. It did rain all night which only meant our farmhouse toilet stopped working! I hope the neighbours didn’t see me using the backyard alternative. Gladly we learned the final horse inspection would take place Sunday afternoon and show jumping Monday.  A call to American Airlines to change our flights?” “certainly ma’am”!

All the Sit Tight team was on board for the show jumping on Monday morning. 70 competitors took part in the show jumping and the excitement of the event was not over yet. Aussie’s Shane and Burto rode super clear rounds to keep the team placing hopes alive, both horses Virgil and Cooley Lands looked spectacular. Looking equally spectacular, Emma McNab on Fernhill Tabasco, confidently clearing fence 1 and 2. Fence 3, a formidable oxer, which many of the horses had a slight glance as they took off, had Toby jamming on the brakes! Who knows what went on in the warm up area before they entered the class or what influenced Toby for this outcome, needless to say it shook Emma up.  It took them both a couple of fences to settle down. Bugger.

Rosalind Canter (not trot) and Allstar B were amazing. Ingrid Klimke and SAP Hale Bob OLD, jumped clear all the way till the last fence and catch the rail with a toe. Team GB all the way!!

Sit Tight Radio scarpered to Charlotte. A little white lie about the weather being the cause of the lateness of the return  of the F truck. Thankfully our flights home seemed to be relatively uneventful. 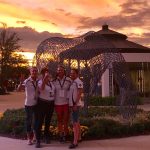 And now for some highlights and awards!

The “Watch Out World” award goes to the Japanese Team; all of the boys were outstanding in all three phases and will be serious medal contenders for Tokyo.

Team Japan also earned themselves a voucher for Kelvin Grove Equestrian to replace the gear that malfunctioned on cross country day. In saying that though nothing was going to get in the way of going fast and clear, in spite of flapping nosebands, broken reins and breastplates!

“Found Your Unicorn” award to Andrew Hoy for Vassily de Lassos! What a fabulous horse, great to see A Hoy looking amazing! 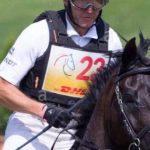 The “Be Prepared” award to the German rider, Andreas Dibowski. Andreas wore a pair of googles cross country that made us think he was more than ready for the on-coming hurricane or maybe he needed them for deep sea diving for tack or an Aussie Bill Levett from the water jump?!

Our final award, “a reverse Chatauqua for failing to stop rather 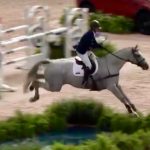 than start” award goes to Meyer’s Happy. He caught Prue’s attention by doing his best to bite his rider and generally being unruly at the first horse inspection. The big fella stayed true to form all the way till the finish line of the show jumping when he actually bolted, not really fast but his jockey Nicolas Wettstien just could not hold him another second. With his big boof head down he did 2 big circles, leapt over the huge water jump at an angle, cleared it and then T-boned the next rider making her way to start her round! Only finally stopping after considering jumping the two sponsors vehicles on display in the arena. Hilarious!!

The whole trip was an amazing opportunity with many laughs and stories to be told and re told. If you haven’t listened to the replays, do! All the interviews of the riders are available. Thanks to our wonderful team Lindsey Constable, Prue Barrett, Rebel Morrow and the farmhouse girls Charmaine Torzillo and Liane Wilcox.

Geisha girl pyjamas (I hope they come in my size!)

Please show your love to our broadcast supporters listed below.

Tinney Eventing, thanks Karen and Stuart Tinney for supporting the scoreboard updates.

Sandhills Horses, Craig and Prue Barrett for supporting the word of the day.